The capital of great Britain was replenished with a unique building, a high-rise building, which grow to the clouds over the prestigious area of Islington. That residential complex, named Сanaletto Tower, truly stands out among the neighboring buildings due to its materials, scale, unusual items and of course due to its facade.

The design of the facades was developed by the UNStudio, that offered its own concept for the tower-building, emphasizing its elite character. 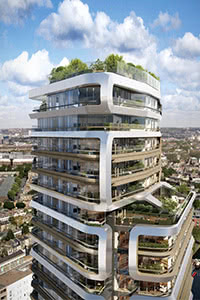 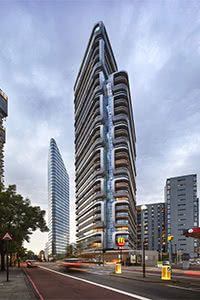 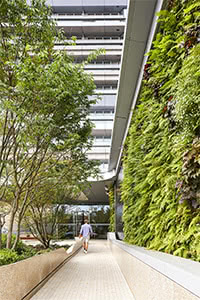 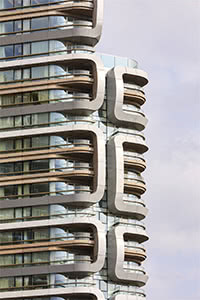 Strips of aluminium panels in combination with panels of fiberglass wrap the skyscraper, dividing it into sections.

Smooth lines of the balconies in each cluster give variability to the facade and a stylish note to the life of the residents of the building. As open spaces play a leading role in the perception of the city view, the creation of unique, protected spaces has become a priority in design development.

The combination of smooth surfaces of aluminium, ash-gray and copper-pink shades of GRC create a contrast with the typical skyscrapers of Islington and give the facade a typical unexpected image. The vertical cluster concept of the building’s facade is designed to minimize the transparency level and to frame the views of the sky, thereby giving the tower a softer and more refined silhouette. This unusual modeling of facade surfaces has expanded the possibilities of maintaining an optimal balance of natural and artificial lighting, as well as provided a reduction in heat loss. 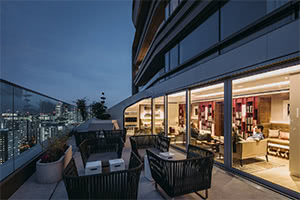 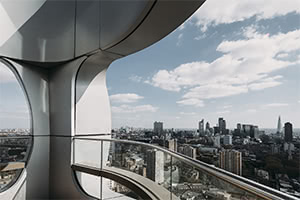 A lot of experts in the field of modern urban planning highlight the exclusive character of the architectural solution of the Сanaletto Tower, noting the importance of facade materials the use of which allowed to implement this bold and in many ways revolutionary project.